2012 dodges this bullet slightly by having neutrinos from a massive solar flare penetrate the Earth and cause the temperature of the core to increase rapidly. “Like a microwave” one scientist very helpfully explains. Of course why these same neutrinos don’t cause the oceans to boil is a plot hole that the movie delightfully ignores. Still compared to The Core or The Day after Tomorrow, 2012’s science is practically textbook.

Now since the core is expanding this causes the earth's crust to erupt in different directions (think a Jiffy Pop container). This allows disaster footage from all over the earth. And we all know where disasters strike first. That's right monuments. Vegas, Washington DC, Vatican City, Los Angeles, Yellowstone, Hawaii, and others get their turn in the special effects blender. The set pieces are generally well thought out often with sly commentary attached. (A giant rolling donut in LA, A slick atheist “Where is your God now” rub at the Vatican.). The special effects are all magnificent.

Both the location work and the disasters are very creative. ( Let's face it a tsunami driving an aircraft carrier into the White House is imagination at work.) In addition, the story is a fairly grounded version of that old When Worlds Collide plot where all the smart, rich and good looking people get on a spaceship and escape Earth while all the less attractive people all die horribly.

The movie halfheartedly tries to address the unfairness of “who gets chosen” but we really didn't come for a civics lesson and honestly there are worse ways to go than just picking attractive rich people. We also didn't come for the acting, but unlike many of its contemporaries, the acting in 2012 seems solid across the board.

Some of the various side plots do fall a little flat (for example taking into consideration 2012's two and a half hour length, the old guys on the boat subplot should have been jettisoned in its entirety.) On the plus side Zlatko Buric as the Russian billionaire ex-boxer and Woody Harrelson as the crazy mountain man (doing his best Matthew McConaughey impression mind you) are the stand outs among an above average cast.

Great Framing with the elevated highway on the left and the garage on the right. Notice the detail work including the pedestrian in the foreground.

One of the admittedly weaker effects was the crowd running from a collapsing St. Peter's Basilica in Vatican City

I like the way they included the Santa Monica Pier

Great population of items in the action shots.

Nice detail work to the left of the frame.

Those Ukrainian cargo planes are quite impressive.

The reflection and mirror work in this movie are amazing. And yes objects in your rear view mirror may be closer than they appear.

I can hear the truthers now... "Why aren't the buildings collapsing on their own footprint"

Plane vs Train gotta love it

Not to pick on the movie but I'm pretty sure the front right wheel of the RV makes outrunning a Pyroclastic Cloud less likely.

The landing gear on this plane is off the chain... oh and a previous scene showed it torn off the plane... oops.

Air Force One gets its big scene.

I love films where they kill off the lead unexpectedly halfway through the film (Such as in Deep Blue Sea or Executive Decision). This is not one of those films.

A tsunami wouldn't affect a large ship in open water... perhaps it was a rogue wave. Yeah that's the ticket.

This scene is repeated with a few different vehicles in the two and a half hour running time. 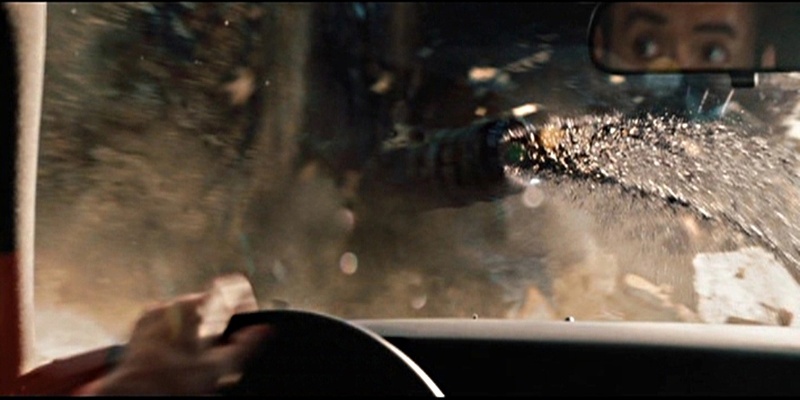 Leaving Cusack's eyeballs in the rear view mirror aside for a moment this scene is a great construct. You see that sewage pipe straight ahead? It is going to cover the escaping limo with sludge thereby preventing the use of side windows. This allows the filmmakers to get reaction shots from the actors within the vehicle without having to painstaking recreate ongoing the disaster outside the vehicle. This simple construct probably saved millions and months of post production.

Why do they have elevated highways (not to mention subways) in an earthquake zone again?

This picture is called taqiyya. Within the Shia theological framework, the concept of taqiyya refers to a dispensation allowing believers to conceal their faith when under threat, persecution or compulsion. It is also the name of a fez style hat. My picture file clearly has been overtaken by Muslim extremists. Oh and I have too many Cargo Plane over Vegas pictures.

Another great chased by the earthquake scene from LA

Those Accordian Buses (sorry Articulated buses) just crack me up.

So maybe camping right under the Washington Monument during the earthquake drill isn't the brightest idea out there.

Where is your God now.... Oh BTW helpful tourist hint Michelangelo's fresco "The Creation of Man" is located in The Sistine Chapel not St Peter's Basilica as depicted in 2012. Please see the film Angels and Demons for all your Vatican City tour needs.

I like the fact the traffic lights still work. Something tells me that a massive earthquake might interrupt power.

And lets us leave with a big bang

Here is the Trailer