7th Street... Where have all the homeless gone?

7th Street: 5 out of 10: Nostalgia about one's childhood is a dangerous thing. It permeates 7th street where Josh Pais is clearly to close to the subject as he bemoans the loss of the crime-ridden hellhole of his youth and worries about the gentrification of said block. (There are outdoor café's now and people are drinking lattés; oh the horror, the horror) 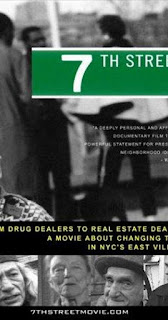 At times, it can be a fascinating documentary; and 7th street has a great group of interview subjects. In particular, Reno Thunder, who was his mother’s occasional boyfriend, shines as the interesting street person with a story. The film alas gives his story short shrift. 7th Street is often a high production home movie. It consists of many interviews with family and friends, many of who often counteract Mr. Pais's thesis about the neighborhood change. Later in the film when Mr. Thunder falls on hard times, the change is so dramatic it is clear that forces, other than the neighborhood cleaning itself up, are at work here.

I wish we had spent even more time with Mr. Thunder after the change and less on Mr. Pais's childhood, In particular, the endless footage of his late mother, and how she was at the center of an art revolution. She actually comes across as somewhat a …how does one put this nicely? She is a party girl. Mr. Pais's brother in a hilarious and all too short clip reminisces on his reaction of finding Marcel Marceau in his living room one morning. It becomes clear that he does not hold the neighborhood (not to mention mimes) to his heart and seemed glad to escape. 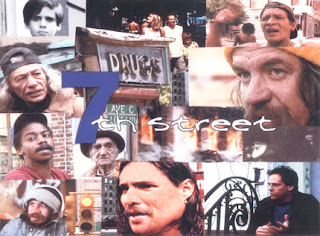 There is a staged and telling scene at the end where an adult Mr. Pais and his friend play in a fire hydrant while yuppies look on disapprovingly. Mr. Pais strikes me as that kind of self-centered person who is only concerned about how his neighbors reflect on his own accomplishments. Obviously successful, mature people make for bad neighbors in Mr. Pais little world.