A.D. Police: To Protect and Serve... Ken Burns does Anime

A.D. Police Files: To Protect and Serve (1999):4 out of 10: After greatly enjoying AD Police Files (1990) I was looking forward to this updated series. What a disappointing mess.

The first disk is a repetitive find malfunctioning robot (In the series they are called Voomers but trust me they are simply robots), Shoot said robot (one bullet usually does the trick) Find new malfunctioning robot. (This town doesn't need the AD Police it needs the consumer protection agency)

Actual plot doesn't rear its head for half a dozen episodes and when it does it's a sleeper. The villain is right out of Batman complete with silly explosives designed to look like toys and a big secret. There is a double-crossing love interest with a big secret. There is a guy who endlessly shows pictures of his kids and how he is going to retire soon (No secret what happens to him.) There is a big company that owns everything. (Gee you think they have a big secret.)

You can see the secrets a mile away and the entire plot reminds me of the background story on a third rate Playstation game. (Think Twisted Metal not Final Fantasy) The show also demonstrates some of the sloppiest police work around. (If your going to arrest a subject under surveillance shouldn't you cut off the exits first?) Also the characters seem to drink at Leaving Las Vegas levels(one entire episode takes place entirely at the bar.)

The voice work on the dub is surprisingly good but the animation is the last straw. Done in that Ken Burns style (pan the photo as substitution for action) it is cheap and like the show itself repetitive.

I'll admit I watched all twelve episodes as they are short and I really hoped for a good payoff at some point. I certainly wouldn't recommend anyone else take the same plunge. 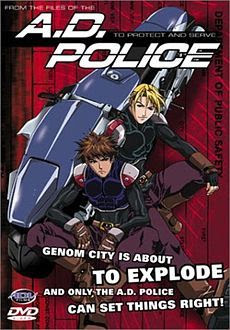