Addio Zio Tom: 7 out of 10: Well they do not make them like this anymore, and let us face it they never really did. This is really three separate films brought together in a blender, set on random. The first film is a highly effective expose on slave treatment and the slave trade in the old south, (the slave ship scenes blows Hollywood fare like Armistad out of the water). Using a cast of thousands and exposing practices such as selective breeding that are politely not discussed on American shores (just ask Jimmy the Greek.) It simply is one of the most realistic display's of 18th and 19th century slave life ever shown on film. 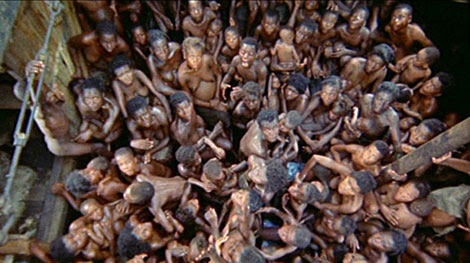 Then there is a second film. This is a dated and looking back rather silly collection, of news footage from the late sixties and early seventies that documents race riots. In addition, all the participants speak in Italian. This creates an almost Woody Allen feel to the dub (It gives What's up Tiger Lilly a run for its money complete with ragtime music cementing the silliness of what should be serious proceedings.)

Making matters worse, the three films are intertwined together seemingly at random with comic buffoonery breaking out during serious scenes. For example, a slave auction is apt to turn into a Benny Hill episode for no apparent reason. Add on a poorly done black revenge fantasy coming,narratively at least, out of nowhere. Anti-white, anti-black and for the apparent sake of inclusion anti-Semitic they once again simply do not make them like this anymore. (It is illegal for one thing) 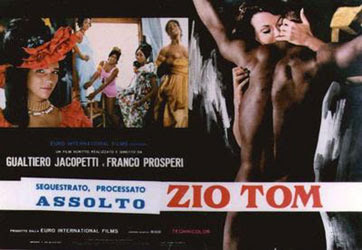 Overlong by at least an hour and very poorly thought out in places Addio Zio Tom wears out its welcome but for a short while, at least it exposes the truth and makes one think.