The Brink...I'm on a Ghost Radio (I wish I was in Tijuana)

The Brink: 3 out of 10: The Brink is competently lensed by Benjamin Cooper and features a pretty good performance by supporting player Heather Chase as well as decent performances by the rest of the cast. For a low budget movie this looks pretty good.

The only problem is that it has the pacing of Manos Hands of Fate and the dialogue of a public service announcement.

The movie's plot is that of a young obsessed girl who tracks down lost plans to Thomas Edison's spirit radio. Does she auction them off for millions and retire happy in her youth? Nah. She gets a few friends together and decides to build it in a spooky abandoned house. (No points for guessing that the house is haunted and if you can't guess she is obsessed with this house in particular the scripts over the top foreshadowing will definitely clue you in.) This set up easily takes half the film. And since by definition nothing scary can happen till the ghost radio is turned on it is extremely pedestrian. (The non-natural verbiage these poor actors are forced to say makes the proceedings drag even more) Of course no one informed the script of this obvious fact so we are treated to endless scenes of people unloading the car while the soundtrack warns of impending doom. I'm still not sure what horrible fate the filmmakers thought we would imagine happening between the car trunk and the kitchen table. 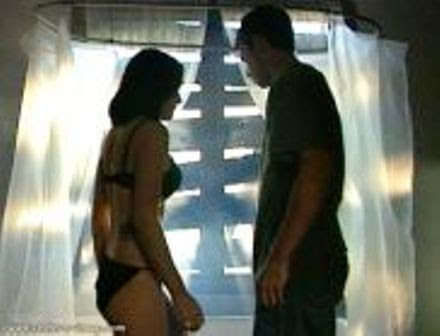 The ghosts do show up eventually and honestly except for a sad Andrea Yates style scene at the end they are neither scary nor impressive.

The film does seem confused by its own plot at times. (The main character refers to her little brother and finds a doll she used to have yet in flashbacks she is clearly an infant. You're opening a valuable suitcase on the side of a busy highway why? You bring extra fuses for a house you have never been to but you don't bring fuses for the machine you built?) Plus you really can't talk to the dead with a regular ghost radio. What you need is a ghost CB radio. That would rule.