Dead Again: 5 out of 10: On-screen chemistry is a funny thing. Some couples simply have it. Tom Hanks and Meg Ryan make a cute believable couple; William Powell and Myrna Loy in their fourteen films together are in my mind the silvers screens best pairing.

On the other hand, Kenneth Branagh and Emma Thompson have no onscreen chemistry whatsoever. One might say despite the fact they were married, yet I would argue that too often whatever chemistry causes an off-screen couple to hook-up simply does not translate to the movies. In fact in many cases it seems to create a negative chemistry onscreen. (Think Tom Cruise and Nicole Kidman.)

Since Dead Again is at its heart a love story, the lack of chemistry is deadly. Branagh and Thompson play two couples. The first, filmed in beautiful black and white, are an angry World War 2 refugee and opera composer and his murdered wife. He goes to the chair for her murder and we flash forward to Branagh as a missing persons detective and Thompson as a crazy mute lady with amnesia. They may be connected to the previous couple and both stories are told alternately throughout the film.

The film itself (in particular the black and white flashbacks) is gorgeous, yet Branagh as a director plays too many tricks for his own good. He cribs so liberally from Hitchcock that the film threatens to turn into High Anxiety 2 rather than an original work.

Without the chemistry between the leads we are left with little more than a hundred film school in-jokes and a strange sci-fi mystical story that we simply have no stake in. 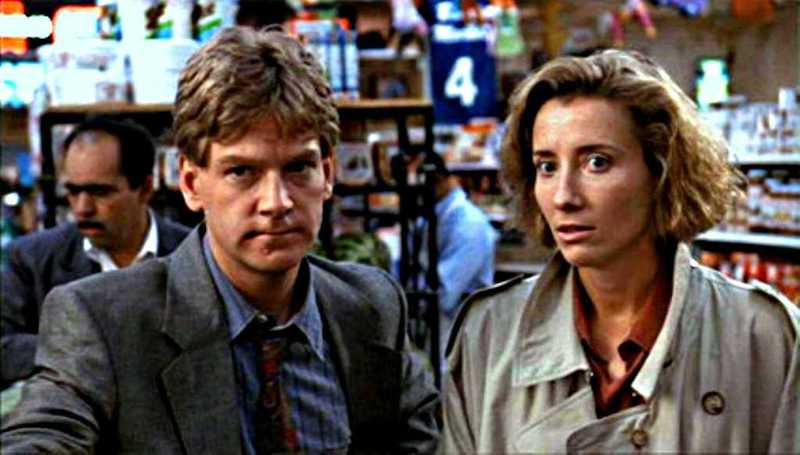